When a Thought Takes You Captive

A thought can become a belief that keeps us captive. But we can have an idea that captures us and inspires growth. We need to nurture the good and true.

‘It’s a weasel.’ The trap had caught and killed a weasel. We had noticed that some animal was eating some of the eggs in the chicken coop, so we had set out a trap. Now the culprit was caught and dead. 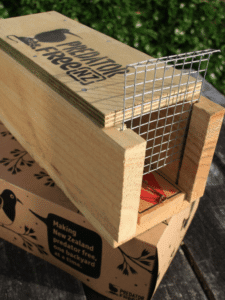 Weasels and other animals like possums, rats, ferrets, and stoats cause a great deal of damage to our natural wildlife here in New Zealand. Before man coming to our Islands, there were only birds. It was just one happy, chirping bird-filled land.

But with the introduction of animals such as possums, weasels, and alike it has been a war against the wild. We love our native birds and forests, and so we work hard at protecting them.

In my thought life, I have some thoughts that are like weasels. They are repetitive, destructive, and so familiar that I don’t even realize that I’m thinking them.

I can guarantee you have them or ones similar.

Their weasels and they’re eating away the real beauty and power of your life. A little thought here and there, keeping you in the familiar territory where you have always thought that thought.

That thought repeated over time, mixed with emotion, becomes your truth. Its the way you see the world. Some people believe the world is flat. They feed the notion. It dominates their thinking.

It has captured them, and it has become their truth.

I want to get a trap that can catch weasel thoughts. You have it connected into the garden of your brain, and every rodent thought that passes through the neuron network are trapped.

Snared before it continues to do damage.

Paul writes in 2 Corinthians 10:5  that we are to ‘take every thought captive to obey Christ.’

We are to grasp every thought.

Imagine yourself grasping a wriggling thought in your hand. You have it in your grip. You have caught it, and you examine it. Is this critter helpful or harmful?

It needs to be obedient, to be under submission, and not allowed to roam free and wild in your life, destroying your beauty and purpose.

Captured by a thought

Let’s flip this around. How about a thought that has captured you? Being captive to an idea.

I’ve had an idea recently that has captured my thinking. It started as an idea, just a little inkling. Then I kept feeding it and coming back to get to it. Holding it in my hands and pondering over it.

It’s about this blog, and the people it reaches, how it’s a precious thing. It’s a community, and I so enjoy how it helps so many people.

It’s an idea I want to foster, nourish, and see where it leads.

Back to our illustration about the problem we have here in New Zealand about weasels, rats, and possums.

Someone at some stage had an idea about creating pest-free zones. Small offshore Islands were made predator-free. Rare and endangered species of birds were given a home to flourish in.

Then that thought of predator-free areas gained momentum, and more people caught the dream. They were captured by the idea of things being different. Thousands of people are now involved in making New Zealand predator-free. We have a goal of New Zealand being predator-free by 2050.

I don’t know whether we will ever become predator-free, but every step towards it is a good one.

What thought has captured you?

For many struggling with a Mental Illness, there is an element of being captured by a thought of despair. That tomorrow will be the same as yesterday. That there is no hope.

Repeated time and time again through the neural networks, it can become so hardwired that it becomes like a flat earth belief system. It is your truth and all you know. It is how you see the world.

A new thought needs to take capture of you.

What anyone of us can do is to invite a good, holy thought of divine inspiration to trickle into our subconscious. We can then nourish and feed that thought. Dwell in it and let it capture us much like a beautiful sunrise or the early morning song of a bird.

God, trickle into my thinking a thought of divine beauty
and purpose. Help me to be captivated by it.

For the next few moments, we invite that thought to be our calling. It grows and displaces those varmints out of the way.

What we focus on grows.

Were not going to make New Zealand predator-free in the next few moments, but in the moment of today, we can do what we can do. I could order a trap for my backyard.

Let a thought captivate you and pull you towards beauty and purpose.