Three Bible Verses to Reassure when You feel Stress

There are times we feel stress, but there is the hope of reassurance when we meditate on some Bible verses.

One of my favorite bible characters was someone who seemed to need consistent reassurance when under stress. He was anxious, unsure, and seemed to want to argue with God. I like that because it means he was much like many of us.

He was human, and that’s important to remember. God chose someone like us. God still chooses imperfect people to do great things. His name was Gideon.

Imagine, if you can, that an oppressive all-powerful military force has invaded your land. You are in hiding and no longer living in your home. Instead, you are living in caves and hiding in the countryside. You grow some crops only to have them destroyed. Any animals you have, get slaughtered by the army.

You are living in fear and always looking over your back, wondering when the next attack would come. You cry out to God for help and wait. This was Gideon’s life.

He was so full of fear that he chose a winepress, somewhere he couldn’t be seen to grind out a small amount of wheat.

But in that hidden place, an angel appeared.

The angel of the Lord came and sat down under the oak in Ophrah that belonged to Joash the Abiezrite, where his son Gideon was threshing wheat in a winepress to keep it from the Midianites. Judges 6:12

Whatever is stressing you out, there is a greater bigger story going on.

We can get so captured by the human reality of the situation that we lose awareness of the bigger story. That God is with us and that God has a different view of us and what is stressing us out.

When the angel of the Lord appeared to Gideon, he said, “The Lord is with you, mighty warrior.” Judges 6: 12

The phrase ‘The Lord is with you’ is repeated throughout the Bible, and when we come to taste the awareness of presence, then our perception of ourselves is invited to change.

The angel gave Gideon the truest version of himself – ‘Mighty warrior.’

I wonder what an Angel would say about you as the truest version of yourself?

When you are sitting in the presence of the eternal, then the present reality loses its power over you. You begin to feel held in something bigger than your version of what’s going on.

Our perception is blinked 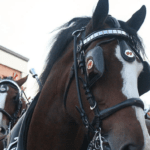 Their world is captured in what they can see.

When under stress, our perception of things can become so narrow and tight that we lose sight of anything else. Our version of reality becomes fixed.

Gideon had a blinkered version of what reality and God was meant to be like. We all do. His version was much like ours. ‘God, you promised this and that, why haven’t you come through on my terms of what blessing is meant to look like’.

“Pardon me, my lord,” Gideon replied, “but if the Lord is with us, why has all this happened to us? Where are all his wonders that our ancestors told us about when they said, ‘Did not the Lord bring us up out of Egypt?’ But now the Lord has abandoned us and given us into the hand of Midian.” Judges 6: 13

I think the angel could see his blinkers. No debate was ventured into, no apologetics lectures were given, and no arguing over various texts. Logic was not going to change his heart, but perhaps a millimeter faith step would.

The strength you have

I was once publicly shamed by a pastor from the pulpit. He didn’t say my name, but enough people knew that it was me he was referring to when he talked about people not having enough faith to go on the mission field. I was in a leadership coaching group he was leading, and it was a topic I brought up the previous week. So much for confidentiality.

‘The Lord’ ( no longer an angel) speaks to this blinkered hiding man. Try and see yourself in Gideon’s shoes.

The Lord turned to him and said, “Go in the strength you have and save Israel out of Midian’s hand.” Judges 6:14

Why I brought up that personal story is that faith and confidence grow little by little and step by step.

Gideon is encouraged to ‘Go in the strength you have’. He wasn’t told to be a Superhero, to fake it until you make it, to be something he wasn’t, to leap, and wait for the net to catch him. You can’t be someone else. You can only be you, so start there.

Instead, he was to start where he was. Faith steps begin from where you are and move to where you can be next.

When under high-stress, I like to be very pragmatic and down to earth. I break the problems down into the smallest tiniest little steps to take and then ‘Go in the strength that I have’ to resolve them.

Surprise! It’s you that’s been chosen

I never thought that I would have a website with weekly posts about Mental Health and Faith. I had a blinkered view, but God didn’t.

Gideon is given an empowering question. A question that moves him to think about the blinkers constricting his life.

Out of everyone available, God chose Gideon. We think we have to be a specific type of person or have various qualifications to be of use to God. God looks at the heart and starts there.

This is a Bible verse that chooses you to consider choosing yourself. Can you do that?

All of us, from time to time, have difficult, stressful times. Periods where we feel alone and anxious. In a winepress doing the daily grind. In those times, it’s important to meditate on these three Bible verses.

5 Steps to take when the Panic button has been pushed

How to Develop a Compass for the Brain

Fight, Flight, or Freeze. There is a Mental Health invite Underneath.

Photo by Christian Erfurt on Unsplash