There’s a Gum Tree Shadow Hanging Over Me

We can live warped lives because of a shadow hanging over us, but that shadow can be removed if we face what’s causing the shadow and allow the light to flood in.

Have you ever walked in a shadow?

Of course you have, but you probably didn’t take much notice of it. We do it all the time.

What about filtered light? Light that has been defused and filtered as it has passed through clouds. Again yes.

We don’t notice it because we are used to it. It’s commonplace and the norm.

Taking this metaphor a little further, we all live with a certain amount of shadows affecting our lives. What I am talking about are the shadows from the past.

She is a grown adult woman, but she can still hear the voice of her father berating her.

What about the man who never knew the fullness of a mother’s love, now the shadow invites him online.

They and we grow used to the ambiance of the diffused light. It’s all we have ever known. Sure, at times, we get a glimpse of sunlight, of something different, but it’s so different that we don’t know what to do with it.

We scurry back into the shadow. It’s safe. Normal and familiar.

The Beetles sang ‘There’s a shadow hanging over me’ and the rock-solid belief in the power of ‘yesterday’.

At the moment, I am pruning fruit trees. One of the trees I am pruning is an apple tree, but it’s on a lean. Not from the wind, or from being hit by some object, but because it’s hungry for light.

Right above the tree, hang the branches of a large gumtree. 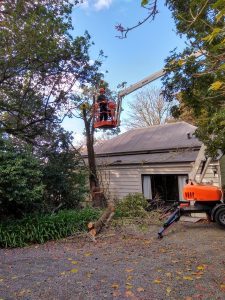 This larger tree casts its shadow over the apple, and the tree compensates to seek out the light.

I really should cut the gum tree down. It would be quite a job, and to cut it down from the base would cause it to crash on the apple tree and destroy it.

I would need to get a cherry picker and go up into the tree and cut it down section by section.

I’ve done this sort of thing before. It’s kind of dangerous but so rewarding when you get to see the results of more light flooding into the garden.

The cause of the problem shadow will only be seen when we look at what is causing the shadow.

I can look at the apple tree all day long and not solve the problem. It’s only when I turn my gaze and see what might be shadowing it will I come to an understanding.

When we come to experience the full light, when we turn and see that which has its shadow on us, it can be like a gum tree has landed on us. For some of us, that’s what is needed.

A deeply religious man, Saul, was one of those who had a light shattering moment.

All this time Saul was breathing down the necks of the Master’s disciples, out for the kill. He went to the Chief Priest and got arrest warrants to take to the meeting places in Damascus so that if he found anyone there belonging to the Way, whether men or women, he could arrest them and bring them to Jerusalem.

He set off. When he got to the outskirts of Damascus, he was suddenly dazed by a blinding flash of light. As he fell to the ground, he heard a voice: “Saul, Saul, why are you out to get me?”

“I am Jesus, the One you’re hunting down. I want you to get up and enter the city. In the city you’ll be told what to do next.”

His companions stood there dumbstruck—they could hear the sound, but couldn’t see anyone—while Saul, picking himself up off the ground, found himself stone-blind. They had to take him by the hand and lead him into Damascus. He continued blind for three days. He ate nothing, drank nothing. Acts 9:1-9

Saul thought he had been walking in the light.

That he had been doing what God would have wanted him to do, yet he was in the darkest of shadows.

The shadow of religiosity. Black and white, rules, and regulations, religion, and self-righteousness.

What casts its shadow on you?

This is an important work. Examing the shadows that are still haunting over you today.

We all have them, and it requires a turning and looking up and back. What is casting that shadow?

Is it the shadows of others gone long before? Generational shadows passed down from generation to generation.

Maybe it was a parent, family member that hurt you. They may not even be aware of the infraction.

Children are excellent recorders of their experiences but poor interpreters. David Riddell

Perhaps its a shadow of something you have done, and you feel shame, guilt, grief, and loss.

You’ve been warped by the shadow. You are stretching and seeking the light, but the shadow remains.

I believe God is on a love mission where they want to make all things new.

And he who was seated on the throne said, “Behold, I am making all things new.” Revelation 21:5

Paul found this newness. A gumtree had to fall on him to make him wake up to God’s presence, but for some of us, that is what’s needed.

Better still to cut the gum tree down branch by branch. To slowly dissect the object casting the shadow and allow the light to flood in.

Where to from here

1. Ask God to reveal what is casting a shadow.
Jesus said these words about Spirit (Holy).

The Spirit shows what is true and will come and guide you into the full truth. The Spirit doesn’t speak on his own. He will tell you only what he has heard from me, and he will let you know what is going to happen. John 16:13

It’s a shadow that’s on you, so you need to take responsibility for it. Avoidance won’t shift the shadow.

3. Ask God for help in removing what is causing the shadow

Imagine that huge gumtree and the enormity of the problem. You cant do it by yourself. We need someone larger and greater than ourselves.

4. Find others to help you dismantle the tree piece by piece.

This will most likely be a journey of a lifetime. Removing branches one at a time. Safely and securely allowing the new light to flood in. Find someone to help.

5. Look for the new light and enjoy its warmth.

As each small limb falls, there is a new light that dances around your life. You can grow straight, produce new fruit, and be enjoyed by others. You are one that has done the work and is now full of fruit.

We all have shadows that limit the light reaching us. Surely we can pray and ask God to help remove the object that is a full awareness of their presence.

Mental health is ... understanding the shadows we are living under and then beginning the process of removing the branches that hide the lightCLICK TO TWEET

Photo by Holger Link on Unsplash