Six People To Put Out Of Your Mental Health Room

Six people you don’t want help from, and there could be more; therefore, its time to detach from them and have them leave your emotional room.

There are some people that I am wary of getting help from or even suggesting others get help from. They may be well-meaning, have good intentions, and a deep desire to help, but they come up short on wisdom.

There is something about them that just doesn’t feel right and shouts ‘avoid.’

In my ebook, ‘So you want to help,’ I list five helping type people that I would encourage you to avoid.

Today I add a sixth.

1. Fundamentalist Fred.
Fred comes alongside and doesn’t lighten the load but adds to it. He lays down the rules, the principles, and tells the person to try harder.

It’s all black and white. You’re either in, or you’re out. There is no room for mystery.

2. Super Spiritual Sally.
Sally comes alongside with a big cheery smile on her face but ignores the reality of what the person is facing. She offers a few quick spiritual platitudes, tosses a ‘Praise the Lord’ here and there, and then she’s off to the next person.

‘Can I pray for you’ is offered before truly listening for the depths. It’s too scary and unknown to go there.

She lives in a spiritual ‘La-la land’ with doses of ‘Woo -Woo.’

3. Rescuing Rachel.
Rachel just loves to help. She comes alongside, takes the burden off the other person, and makes it her own. Isn’t she just so caring!

She continues to carry and rescue without wisdom. She eventually becomes overwhelmed and exhausted.

Caring does not mean carrying. The servant becomes a slave.

4. Program Pete.
Pete has the answer. He has a course, he has a book, and he has a lecture to give. Pete comes alongside and informs.

He takes people to the course; provides the information and says, ‘just go and do it!’

He walks away in frustration because, in his learned opinion, people are lazy and don’t want to change.

5. Superficial Sarah.
Let’s keep things light on the surface. If you’re smiling, Sarah will smile with you; if you’re not, she won’t know what to do.

Sarah is hesitant to talk about anything that might be difficult. She avoids the people who are in obvious pain. She likes happy endings and fairy tale novellas.

6. Blind Bill
Bill has sight problems in that he can’t see beyond the here and now to what could be. There is no compelling vision that excites or allures him to go deep and be patient with the larger story being played out.

His mindset is stuck. Worse still is that he can be quite mocking and cynical of those that can look beyond the present struggle.

There might be others too that are less than helpful. Perhaps you can see yourself in some of them.

Put them out of the room.

One of the enjoyments of reading the Bible many times is that you start to see little snippets and sentences which make you want to reread the story again and again.

You start to see things that weren’t so obvious in the first reading.

One of those is this Jesus story, where he came across some people he chose not to seek their help or opinions. He was laughed at for his wisdom.

When Jesus had again crossed over by boat to the other side of the lake, a large crowd gathered around him while he was by the lake. Then one of the synagogue leaders, named Jairus, came, and when he saw Jesus, he fell at his feet.  He pleaded earnestly with him, “My little daughter is dying. Please come and put your hands on her so that she will be healed and live.” So Jesus went with him.

While Jesus was still speaking, some people came from the house of Jairus, the synagogue leader. “Your daughter is dead,” they said. “Why bother the teacher anymore?”

Overhearing what they said, Jesus told him, “Don’t be afraid; just believe.”

He did not let anyone follow him except Peter, James, and John, the brother of James.

When they came to the home of the synagogue leader, Jesus saw a commotion, with people crying and wailing loudly. He went in and said to them, “Why all this commotion and wailing? The child is not dead but asleep.” But they laughed at him.

After he put them all out, he took the child’s father and mother and the disciples who were with him, and went in where the child was.  He took her by the hand and said to her, “Talitha koum!” (which means “Little girl, I say to you, get up!”).

Immediately the girl stood up and began to walk around (she was twelve years old). At this they were completely astonished. Mark 5:21-24; 35-42

I have this movie in my imagination, where I see Jesus shooing out all these people from the room. A bit like a shepherd moving stray sheep that have wandered into a house.

Or maybe it was like herding cats. Chasing them around the room to get them out.

Some people want to be there for the show, the entertainment. This, of course, was the synagogues leader and his daughter.

But nothing great was going to happen while the room was full of critics and mockers. Nothing of astonishment was going to be seen while a bunch of Blind Bill’s were dominating the stage and holding the microphone.

Jesus put them out of the room, and then the healing began.

Who are you surrounding yourself with

From time to time, you have to think about who you are surrounding yourself with. Who is in the room?

Some questions need to be asked.

Jesus warned his followers about giving out your very best to people who don’t appreciate it. He described it like this.

“Do not give what is holy to dogs; and do not throw your pearls before swine, or they will trample them under foot and turn and maul you.” Matthew 7:6

Those wailers and naysayers in the home of Jairus were trampling and mauling over Jesus’ holy intentions. Nobody needs pigs and dogs, soiling God’s good work.

Putting them out of the room

I suppose it’s about lines of love and respect (boundaries).

We need to prayerfully ask Spirit (Holy) to nudge you about those people that are in your room and not helping.

What emotional connection do they have? What sway?

For some people where there is little physical connection, such as celebrities, writers, etc., it’s easy to unsubscribe, disconnect, and turn off.

But what about if it’s your spouse or a family member. Someone who you cant easily turn off.

Jesus offers us some wisdom about taxing people. People who want to tax your life, restrict it, and hold you back.

They sent some Pharisees and followers of Herod to bait him, hoping to catch him saying something incriminating. They came up and said, “Teacher, we know you have integrity, that you are indifferent to public opinion, don’t pander to your students, and teach the way of God accurately. Tell us: Is it lawful to pay taxes to Caesar or not?”

He knew it was a trick question, and said, “Why are you playing these games with me? Bring me a coin and let me look at it.” They handed him one.

“This engraving—who does it look like? And whose name is on it?”

We give others what they rightfully deserve – love and respect, but that which is in the room called holy, beautiful, tender, and full of Spirit delight, well, only those who have earned the right get to have a look are allowed in.

It’s about acknowledging your self-worth that you have something both beautiful and impacting inside of you.

Then you quietly, and maybe not so quietly at times, kick out the stray dogs and greedy pigs.

When my kids were little, I used to read a story to them called Pigsty. 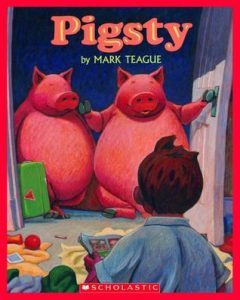 It tells the story of a boy called Wendell Flutz.

Wendell Flutz’s room isn’t a mess. It’s a total pigsty. But Wendell’s mother can’t get him to clean it up. Wendell doesn’t think the mess is so awful. In fact, he doesn’t even mind it when one day he discovers a real pig sitting on his bed!

Wendell didn’t mind when the first pig moved into his room. They were friends, but then other pigs turned up and started to dominate his life.

Spoiler alert. It all started to change when Wendell took control, cleaned up his room, and the pigs didn’t find it so appealing. They left.

Perhaps many of us have allowed pigs into the living room when they should be out back in the yard doing piggy things.

We can’t live in isolation. Cheerleaders and people who ‘get you’ are crucial for your ongoing journey.

In seeking out the ‘Jesus’ type people, those who deserve to be in your room, it’s going to be slow and tender.

Look for those who will hold you in love and respect no matter what they might discover. They ask gently curious questions rather than being quick to advise.

Prayerfully ask for discernment amongst the myriad of voices that come to you.

It takes time to clean up the pigsty, but you can do it.

Photo by Michael Jasmund on Unsplash