Picking Up The Broken Pieces

It was tasting the dust of devastation. The broken pieces. But those fragments can be brought together, and so we quietly form a new mosaic

Broken pieces. That’s all that was left behind.

It was a moment that captured the world’s attention.

A massive explosion of ammonium nitrate brought a city to be a pile of rubble.

But amidst the dust 79-year-old May Abboud Melki, played Auld Lang Syne on her piano in her broken apartment.

Playing in her pain.

She then went on to play Arabic hymns, which caused those around her to gather around and start worshiping.

“To see her lean into her faith, lean into God was something that was a strong message to her community and our family immediately”May-Lee Melki –  granddaughter.

Most of us will never have to face the type of devastation caused by such an explosion. But it could be an earthquake, hurricane, tornado, flood, bush-fire that brings us to a place of picking up the pieces.

As you read this tap into the emotions of loss.

Something has swept through your life and now it’s like everything has been turned upside down, shaken around, and thrown to the four corners of the universe.

You are left with a few fragments from which to rebuild.

As part of my devotional life, I find it helpful to meditate on scripture. One of the ways I do this is through the ancient art of Lectio Divina.

Lectio Divina asks the listener to be quiet and listen to a passage of scripture and allow God to speak to you personally through this.

I use a podcast called Daily Lectio Divina.

One of the readings this week was about the feeding of the 5000 by Jesus. The miraculous turning of a few loaves of bread and some fish into a banquet for the multitude.

At the very end of the story is the mention of the cleanup crew.

and they took up what was leftover of the broken pieces. Matthew 14:20

I could see all those people fanning out and collecting the scraps. There would be joy, amazement, and songs of thankfulness.

But I wanted to know what they did with all those pieces of fish and bread.

Did they get creative and make some sort of fish cake? They didn’t have freezers to store it for later use so perhaps they gave it away.

I think that’s what they probably did.

As they traveled along, following Jesus, they told the story and shared the bread and fish. They, and others feasted on the leftovers, the broken pieces.

It’s a nice Jesus story, isn’t it. Everyone is happy. Full stomachs and the needs of the heart met. We like it like that, don’t we.

For Jesus, there were thousands of happy people following him. Ministerial success! He was now the leader of a mega-church!

Yet, a few years later, after walking a very narrow path of crushing discipleship only a few friends remained.

I wonder sometimes how long Jesus would last in our modern PC church world.

Political Correctness and Pastoral Correctness might just see him excommunicated while the good people continue to sing him their happy songs.

Life is full of broken pieces. Leftovers after a storm of life.

The marriage fails, a child dies, cancer rages through the body. You’re made redundant after years of faithful service. No longer needed. A pandemic sweeps through your village.

You sit and look at all the shards of debris and grandma moves to the piano.

She’s been there before.

What prompted the nudge?

As I pondered over the passage I wondered why Spirit (Holy) gave Matthew the nudge to write this little facet of the story down.

Perhaps God wanted us to know how amazing the miracle was in that there was so much leftover.

Or might it be that God wanted us to know that there was a divine interest in the broken pieces? Those little things that most would discard as being worthless. The scraps of our lives.

Your broken pieces, those things that might seem as leftovers and trash to most, may just have a purpose as you rebuild out of the devastation.

The pieces of a jigsaw puzzle might come together and form a new mosaic.

A picture of new beauty. 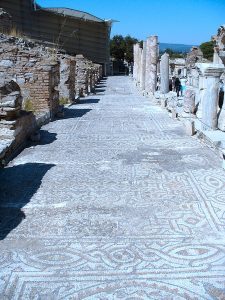 Years ago I had the opportunity to visit the ancient city of Ephesus.

It was a city of ruins, but it was also a city where I knew the apostle Paul had walked and talked.

As we walked down the streets our guide called us over to the sidewalk.

He then took his water bottle out and squirted some water onto the pavement. With the dust washed off a beautiful mosaic appeared.

Ancient colors burst out from under the dirt and washed us with delight.

Broken pieces, of various colors, all arranged into a pattern.

Someone, thousands of years before, had collected some broken pieces and with Spirit-led, creative celebration, made art for us to enjoy.

As you have read this you may well have been nudged about the broken pieces in your life. I hope so.

What is the invite God is whispering to you?

Can you pick up a few broken pieces and form them into a mosaic that might help you make sense of it all.

Do it slowly with a sense that this artwork can take as long as it needs to take.

There is no rush or demand to perform to anyone, including yourself.

Your broken piece artwork may be the gift another person is needing to savor off in their broken world experience.

The challenge is whether you are willing to look at your broken pieces, own them and their pain, and then invite the Jesus of miracles to come and co-create a new mosaic.

Mental Health is ... acknowledging the broken pieces in our lives and then, with Spirit-led creative design, join them together as a gift to yourself and others.CLICK TO TWEET