Falling to the Oldest Trick in the Book. Ministry or Manipulation

I watched them do it. They said a few words, suggested some options, smiled in a certain way, and waited. It wasn’t long before they had what they wanted. They had laid out the bait, and the person had grabbed it.

I then wondered how many times people had fallen to this subtle and sly manipulation. They were such an expert at it. Their success, their control was based on their ability to get others to do what they wanted them to do.

What’s it like to find out you’ve been manipulated?

To have someone use all sorts of little tricks and techniques to further their own cause.

The oldest trick in the book

You may have heard of the little phrase ‘The oldest trick in the book.’ It refers to a way of tricking someone that is still effective, although it has been used a lot before.

The oldest trick in the Bible.

I’m going to suggest that the oldest trick, that sly manipulation, was one that came from a snake.

Now the serpent was more crafty than any of the wild animals the Lord God had made. He said to the woman, “Did God really say ‘You must not eat from any tree in the garden’?”

That word ‘crafty’ is about being creative.

I know someone who can take pieces of driftwood, flax, twine, twigs, and cane and craft them into a basket. Crafty can be good. It’s creative. It’s twisting, bending, and making something out of the raw materials on offer.

Crafty can also be bad. Twisting the truth, manipulating and bending a few words for them to seem something different to their original intention.

“Did God really say” is such a sly little question.

It’s a hook to open up doubt about whether God is holding out on something good.

It’s the oldest trick in the book to raise a doubt, to suggest a lack, to whisper ‘you might be missing out.’ It’s a comparison, and you’re the one that’s lacking.

I think of the prodigal son leaving the father, thinking he knew better about where life could be found, and then his brother whining that he had missed out on something.

The oldest truth in the book

There is a truth that is deeper and better than the trick, and it’s so profoundly good that we are not aware of it.

Jesus, in the story of the loving father, speaks the truth to the trick.

‘You’re with me all the time, and everything that is mine is yours’ Luke 15:31

That was the awareness that we had as humanity before believing the trickery of the serpent, the satan, the accuser. There was closeness and fulfillment.

Satan tried it on with Jesus too ‘You can have it all – if you bow down to me.’

Jesus already had it all and knew it.

When I was a child, in the church denomination I grew up in, the pastor was called ‘minister.’ Other churches had priests, pastors, and vicars. We had a Minister. They were to minister to the needs of the church.

Yet so often, then and now, I find many ministers are often manipulative in their ministry.

This, of course, is done with good intentions, but I wonder if what we do as ministers (and I include myself here) is more about manipulation than true selfless ministry. Reaching a goal rather than sharing a grace.

We have a goal, so we will manipulate a response.

Frank slips out of the pews and has a coffee with a man on the street.

Jenny visits the depressed woman next door who struggles to get out of bed, clean the dishes, and open the curtains. She listens deep.

Where do you think the man of sorrows would rather be?

I want to overflow you.

Imagine if you can three close friends. They know everything about each other, and individually they want to outdo each other in giving goodness to each other.

Essentially one of them says to the other two, ‘I’m so excited to know you that I want to overflow in ministry to you. I want to flood you with love.’

The other two have a chuckle and a laugh of joy, and then individually, they repeat back to the other the same words. ‘I’m going to outdo you in love.’ 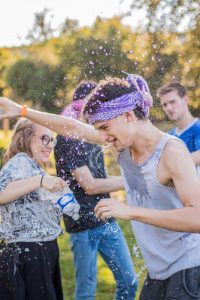 The response is a Clint Eastwood face and words, ‘Go ahead, make my day.’

They all fall apart in laughter then resume the water fight of overflowing love.

They outdo each other in ministering to the other.

This back and forth overflowing is like a perpetual motion outpouring of trying to outdo each other in love.

Oh yes, and you are in the middle of this wash. You’re getting splashed with overflow, but you don’t even know it.

Then a serpent appears and spins a crafty lie. ‘They’re holding out on you. They can’t be that good.’

An ever so slight shift in gaze, and you’re gone.

Sin is not being far from God, it’s turning our gaze in the wrong direction. Simone Weil

The oldest truth in the book came alive when Jesus took on the role of the lowliest servant and washed His disciple’s feet.

The evening meal was in progress, and the devil [read the prince of manipulation] had already prompted Judas, the son of Simon Iscariot, to betray Jesus.

Jesus knew that the Father had put all things under his power, and that he had come from God and was returning to God; so he got up from the meal, took off his outer clothing, and wrapped a towel around his waist.

After that, he poured water into a basin and began to wash his disciples’ feet, drying them with the towel that was wrapped around him.
John 13:2-5 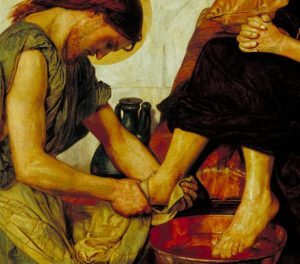 Here in Jesus’ final meal, there was no servant to wash their feet. It was always the lowliest of the servants that got the task of washing dirty, dusty feet.

No one would ever jump up and say, ‘pick me!’

So Jesus chose to minister. That was his mode of being. He was a minister, not a manipulator. He wasn’t trying to manipulate a response, it was a job that needed doing, and he decided he would do it.

Something of the life of communing with Father/Mother and Spirit (Holy) was pouring out sacrificially into the toes, cuts, and calluses of these men’s feet.

Let your mind go there for a moment. Feel the water and the fingers of the Christ work between your toes.

This act of ministry caused a ruckus. Jesus often did.

What’s it like to be ministered to? To have love poured over your wounds, your tiredness, your depression, your anxiety? Ministry without any strings attached. Being foot massaged by someone being a conduit of Jesus’ love.

In your relationships, are you more a minister or a manipulator?

Ouch! That’s a tough question because so often, I think we, without any awareness, lean more to manipulation than ministry.

We have a  subconscious accountant’s balance sheet. ‘I’ve done this for them, so they need to do this for me.’

So often, we do things for others in the hope of what we will receive back. When we don’t, we get all resentful, bitter, and turn down the flow.

Questions to Grow in ministry, not manipulation.

1. What is your heart goal?
What is the deepest desire in your heart that you aware of? Ask God to reveal the truest motivations for your actions.

2. Where are you being filled?
If you’re giving out all time, you will become tired and fatigued.

What fills your cup? For Jesus, it was a retreat to the mountains.

Do you have people in your life that seem to naturally want to minister into the toes and crevices of your daily dusty walk?

How does God minister into your tiredness?

3. Do you have personal lines of love and respect?
It’s ok to have limits to how much you can minister. Jesus didn’t minister to everyone; he knew his personal earthbound limitations.

So out of love and respect for himself, he was focused on what he could and couldn’t do. It’s ok to say ‘No’ or ‘Not at this moment.’

You pour God’s love out to others through your words and deeds. In the pouring, you see a refreshment coming to you personally from God.

You take care of the pipeline and maintain its strength and integrity. 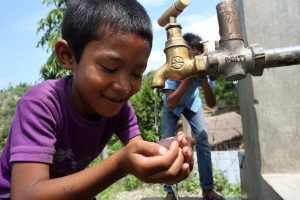 It’s a fine line that only Spirit (Holy) can help you with.