Dreams, Visions, and Revelations. How they can help

Dreams, visions, and revelations are part of our lives, but what do we do with them? We can treasure them and find their help.

Each night as I am about to sleep, I pray a simple two-word prayer – ‘Spirit come.’ I then emotionally see myself being cocooned inside wide and welcoming arms like a little child that needs deep love and assurance.

I have puzzled over why these are the two words I pray, and I think it’s the desire to enter my new day within the embrace of Spirit (Holy).

See more about entering your day by going to sleep here.

I generally drift off in this prayerful embrace, but a few nights ago, I met a crocodile.

The Crocodile and The Christ

I was going to sleep, well I was trying to go to sleep, but my heart was anxious. Deep thoughts of worry and fear were bubbling around.

That’s when I saw the crocodile. It was kind of a vision, a pulling back of the curtain and seeing beyond what I would not normally see.

It was sitting in a swamp some way off, and then it saw me. It turned and slowly began crawling towards me. I couldn’t move as if I was mesmerized by it.

It was now racing towards me. Mud flying everywhere. That large tail was swishing and smashing everything in its path.

I was filled with panic and fear. I was going to be mauled by this huge beast.

In an instant, there was a strong right foot standing on the crocodile’s head, pushing it into the mud. It writhed back and forth but couldn’t get free. Meanwhile, the foot remained steady, strong, and seemingly effortless in its action.

I looked up to see who this was. My heart knew at once. Hearts have a way of recognizing true friends.

It was the Christ. By the way, Christ is not a surname; it’s a title, a designation, a certainty. It means ‘anointed.’

This was the Christ that I think John saw when he wrote his Revelation.

But in my vision, he was tall, thin, and had the appearance of what I have seen in many icons—stoic, authority, strong.

It was the Christ who had been there done that. He wasn’t all macho and superhero; he knew his authority without having to parade it. There was a kind of Clint Eastwood stanch – ‘Go ahead punk (crocodile), make my day.’

I looked again at that crocodile, and it was still writhing and wrestling, but the foot just kept it there. Steady and strong, firm and weighty.

Then I looked at the Christ, and he was holding a scepter in his hand. It wasn’t a fancy one with gold and diamonds, more so it was a plain stick. It was worn and ancient old. But it carried the authority that all scepters hold. It’s was the one scepter to rule them all as such.

Jesus, the Christ, had won it all.

He was not going to allow anything to attack me. All I had to do was cry out.

I felt secure that I was known and held, that nothing could consume me.

This was the Christ of the now. The one who has risen and was ruling.

I think it’s important to take notice of your dreams, visions, and revelations.

Those moments where seemingly the curtain is pulled back, and we get a glimpse into something beyond the here and now.

I’ve not had many experiences as vivid as the Crocodile and the Christ, but I’ve had enough to know that they should be taken notice of. To hold them and listen to the emotional message they carry.

As I reflected on the vision, there were emotional components that needed to be taken in deeply. Fear met with overwhelming assurance. Vulnerability is embraced with being known.

The Bible is full of dreams, visions, and revelations. It seems to be a method God uses to cut through the clutter of our rational thinking. Starving Cows, full cows, fiery wheels, spinning stars, all pointing us to something beyond our ‘this present moment’ understanding.

One of my favorites is the eye-opening experience of Gehazi, the servant of Elisha.

Early in the morning a servant of the Holy Man got up and went out. Surprise! Horses and chariots surrounding the city! The young man exclaimed, “Oh, master! What shall we do?”

He said, “Don’t worry about it—there are more on our side than on their side.”

Then Elisha prayed, “O God, open his eyes and let him see.”

The eyes of the young man were opened and he saw. A wonder! The whole mountainside full of horses and chariots of fire surrounding Elisha!  2 Kings 6:15-17

It’s interesting to note that the name Gehazi means ‘valley of vision.  Perhaps his vision was limited to the logic of the known valley walls. So many are like him.

But I wonder what happened at a heart level in Gehazi. I suspect that emotions of assurance superseded the emotions of fear.

Are you more right-brain-orientated or left-brain orientated? We need both. 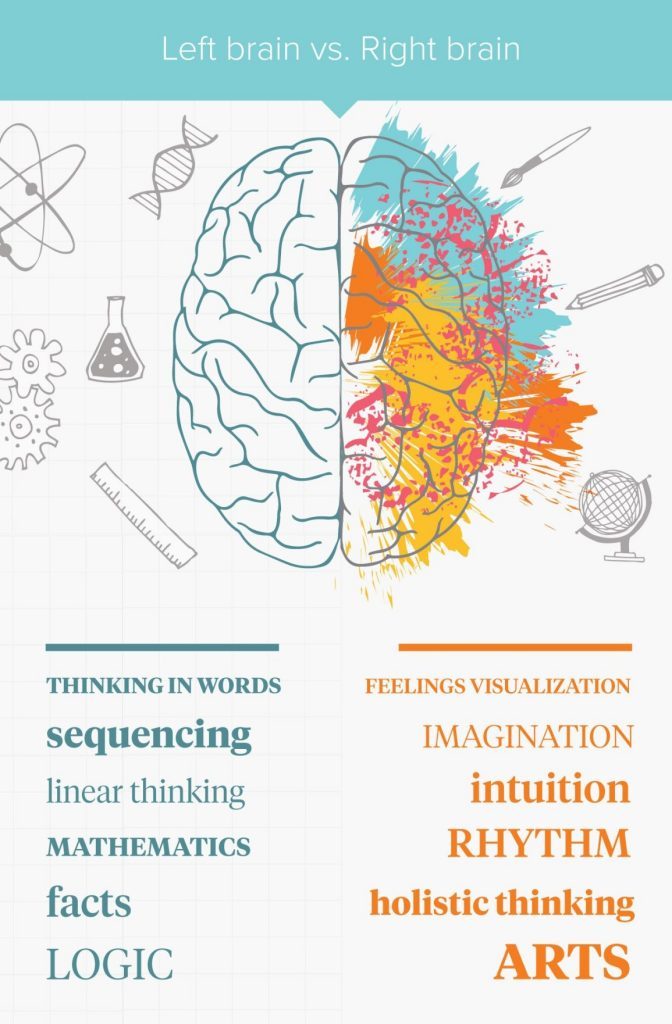 There is a whole science about the differences in the left and right brain hemispheres of the brain. Read more here

Basically, though, the different sides of the brain have different functions.

The left brain is more verbal, analytical, and orderly than the right brain. It’s sometimes called the digital brain. It’s better at things like reading, writing, and computations.

The right brain is more visual and intuitive. It’s sometimes referred to as the analog brain. It has a more creative and less organized way of thinking.

How many books and sermons have been written to analyze and codify the dreams, visions, and revelations in the Bible. We try to make a prescription out of a description.

I would love to sit with some of those in the Bible who experienced dreams, visions, and revelations and go into the right brain experience with them.

What happened in you, Gehazi, when you saw the chariots of fire? What shifted in your heart? How do you understand God differently now?

Going right brain in your dreams, visions, and revelations

I use a little acronym when I have a ‘pulling back of the curtain’ experience. It’s T.T.A.Q. (Title, Theme, Affect, Questions)

The second thing I would highly recommend to do after T.T.A.Q. is to simply sit with the new expression. Be like Mary, who ‘treasured up’ all her discoveries about the Christ in her heart.

But Mary treasured up all these things and pondered them in her heart. Luke 2:19

In that pondering and treasuring, our hearts and minds change and become more open to seeing new revelations of the Christ in our everyday life.